AN HISTORIC Whitehaven ship’s figurehead, thought to have gone missing, has pride of place in a European art collection.

Back in January 2020, The Beacon Museum shared a 1930s photograph of the piece, from the ship the Whitehaven Lass. The picture was thought to have been taken in the Whitehaven area, but the current whereabouts of the figurehead were unknown.

The social media post was spotted by international figurehead researcher, Richard Hunter, who got in touch with Copeland Borough Council.

He was able to liaise with the current owner, a collector from the continent who wishes to remain anonymous. The collector said: “I am pleased to have been able to obtain such a fine and historic ship’s figurehead for my collection.

“When I purchased the carving, I was not aware of its name or history. I was surprised to hear it is one of only a handful of surviving figureheads with the name of the carver – J Brooker - carved into the base. This has given her a special significance.”

The figurehead was bought in 1998 from an antique dealer in Hamburg, Germany, who had the piece in his private collection but was looking to sell items due to the imminent closure of the business.

Mr Hunter said: “I was contacted by the owner and asked to produce a full report on the figurehead and its history. He was unsure of whether the “J Brooker” carved on the base was the name of the ship or the carver.

“I was able to establish this was a rare figurehead with a known history. She is a fine-looking ship’s figurehead in her own right, but also has the name of her carver on the base. Only a handful of such pieces survive, and sadly none are in the UK. Another Brooker figurehead can be found in a public collection in Sweden.”

Alex Milner, Curator at the Beacon Museum, said: “When I came across the mysterious photograph, I was intrigued as to where this this piece of Copeland’s heritage might be – so I’m delighted to see it has survived and is being cared for. It is always good to know that pieces have not simply become lost over the passage of time."

Mr Hunter would be grateful to hear if anyone has further information on the figurehead’s carver, J Brooker, or any other local figureheads. Contact him at www.figureheads.co.uk.

Pic captions:
The Whitehaven lass figurehead in a garden, believed to be in the Whitehaven area, in the 1930s

The Whitehaven Lass figurehead in its current home, part of a private collection in Europe 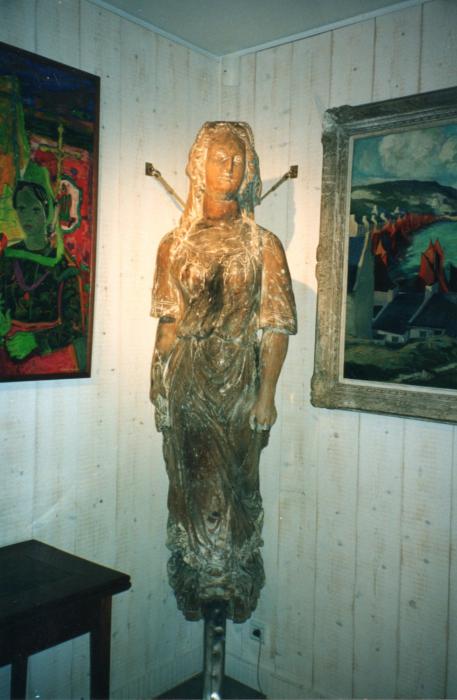