A SCHEME aimed at increasing safety and improving standards in licensed premises in North and West Cumbria has been launched.

The national Best Bar None scheme has been rolled out to premises in Whitehaven, Workington and Carlisle in a bid to encourage licensees to strive for nationally-recognised accreditation.

Following the launch event in Whitehaven yesterday (Tuesday), licensees can now register their interest in taking part. An assessment period will follow later this summer, with the first annual awards night held in Carlisle in November.

Best Bar None is open to licensed venues including pubs, clubs and restaurants, and benefits for those achieving the status include:

-        Increased footfall to businesses by creating a safe night-time economy

The North and West Cumbria scheme has been organised by the district authorities and Cumbria Constabulary, with support from Cumbria County Council, the West Cumbria Community Safety Partnership, and Pubwatch. It is run locally by a Steering Group made up of police, local authority and industry representatives.

Mike Starkie, Mayor of Copeland, said: “There are significant benefits of a premises being recognised with the Best Bar None stamp. Primarily it offers a boost to their reputation in that they can show customers that they are working hard to achieve and maintain high standards.

“It also offers the opportunity to share best practice with colleagues, and invest in their staff in terms of training.

“With schemes like Pubwatch already achieving great results, I am delighted that Best Bar None is being adopted here to further strengthen the message that Whitehaven - and Copeland as a whole - are safe places to enjoy a night out.”

Sgt Mitchell Franks, the licensing officer for West Cumbria, said: “West Cumbria Police are pleased to be part of a joint push with our colleagues in Carlisle and our partners across Cumbria to launch Best Bar None in 2019.

“It is our intention to raise the standards of venues across the area and build on the work already undertaken by licensees through the Pubwatch schemes.

“Schemes such as this can only improve those venues taking part and deliver the aim of a night time economy free from crime and disorder.

“The aim is to ensure customers who wish to enjoy themselves on a night out do so in safe and vibrant venues.

“The scheme already complements the work we have been doing with the industry recently, such as efforts to stop young people using false IDs and the Ask for Angela campaign (which helps people feeling unsafe on a date).

“I would encourage licensees to register for the scheme and embrace the ideals of Best Bar None.

“I also look forward to assessing the venues over the summer and delivering those venues that excel in the scheme with awards.”

Sgt Scott Adams, the licensing officer for North Cumbria, said: “This is a great scheme for licensees to become involved in.

“It’s for the benefit of customers and helps to raise the standards of venues.

“There are already about 14 venues agreeing to look at this in the Carlisle area – and we’d encourage anyone else interested to come forward.”

Cumbria’s Police and Crime Commissioner, Peter McCall, said: “Whilst we do not want to stop people having a good time, it is important that they do so safely, within the law and acting responsibly and with respect for those around them.

“The Best Bar None scheme, alongside other recent initiatives such as the Fake ID scheme, ‘Ask Angela’ and Pubwatch, are all intended to keep everyone safe and able to enjoy a night out with friends. The scheme gives knowledge and skills about regulation agencies and enforcement to licensees and bar staff, helping them to responsibly manage their premises, reduce underage drinking and reduce anti-social behaviour.

“Rowdy gangs, underage drinking and threatening behavior are dangerous and not an acceptable part of an evening out. It is not the norm and we must not tolerate the impact a few people can have on everyone else’s otherwise enjoyable evening out.

“The constabulary will continue to police the night time economy robustly but we need everyone to play their part, behave sensibly and do not run the risk of getting into senseless trouble with the law.”

All premises in Whitehaven, Workington and Carlisle are initially eligible to participate, and it is hoped the scheme will then be extended to other areas.

For further information contact licensing@copeland.gov.uk (Whitehaven), licensing@allerdale.gov.uk (Workington) and scott.adams@cumbria.police.uk (Carlisle). Licensees in Whitehaven can also get involved in the project on Facebook, LinkedIn and Twitter (BBNWhitehaven). 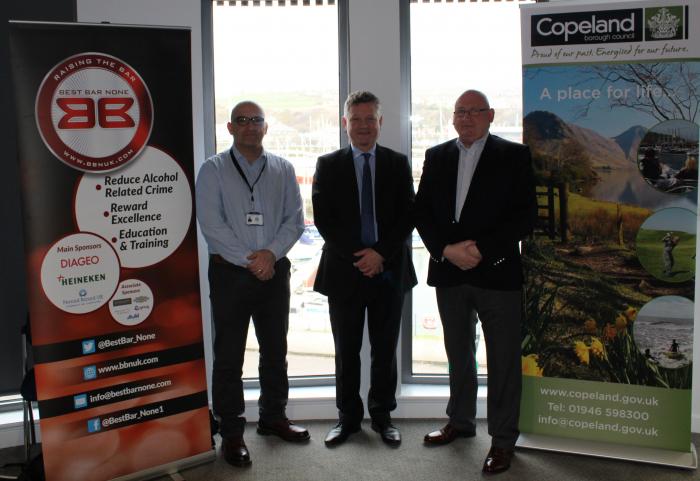