Hundreds of people tried their hand at traditional crafts in Whitehaven recently.

Organised by Crosby Granger Architects on behalf of Copeland Borough Council and the Whitehaven Townscape Heritage Initiative (THI), the fair in the town's Market Place attracted around 600 people.

As well as the chance to have a go at these traditional skills, visitors were able to discuss building problems with experts and get advice on energy efficiency, flood resilience, fire protection and more.

Copeland Council staff were there to get feedback on plans to enhance the public areas of Market Place and James Street, under the THI scheme.

Copeland Council’s Heritage Champion, Coun Michael McVeigh, said: “I am delighted so many people came along. There were people of all ages and they were keen to get stuck in and have a go at these important traditional skills.

"In a town with such an important architectural heritage, it's vital we don't simply let these trades die away. Not only are they important in caring for older buildings, but they are increasingly being found to be more environmentally-friendly and sustainable then modern alternatives."

Tim Wells of Eden Lime Mortar said the event had been a success: "I spoke to a builder who tanks houses for a living. He has now seen the light and plans to get training in using lime instead of cement. Some home owners discovered, after chatting with me, that cement was ruining their houses. They now understand how lime works and have some knowledge when talking to their about materials. I would say the day was a success."

Chloe Granger of Crosby Granger Architects, said: "Traditional skills shortage is a real issue affecting the sustainable repair of our historic buildings. Keeping those crafts alive is critical, not only as a testament to our past, but also because traditional materials are the only way we can ensure compatibility with existing structures when repairing them. The aim of the fair was to reach out to the public, make them aware of our traditional skills, and show people how best to maintian their traditionally-built homes."

Crosby Granger Architects organised the event on behalf of the Whitehaven Townscape Heritage Initiative and Copeland Borough Council. The Whitehaven Townscape Initiative is funded by the Heritage Lottery Fund, Britain’s Energy Coast, Copeland Borough Council and Cumbria County Council. It has funded the sympathetic refurbishment of residential and retail properties in Market Place and James Street, and training for local builders in heritage construction techniques. 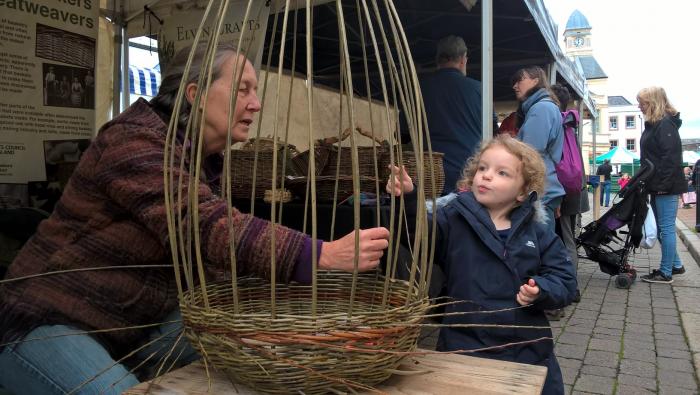