Clean up for the streets of Copeland

TWO new Pride of Place team members have been employed to clean up the streets of Copeland.

Copeland Borough Council has employed Malcolm Litt and Greg Smith to undertake various duties such as litter picking, weeding, emptying bins and general cleaning of the borough’s towns and villages.

Mike Starkie, Mayor of Copeland, launched the Copeland Pride of Place campaign in January 2018 to highlight everything that is positive in the borough and to shine a light on those individuals who disrespect our communities through vandalism, fly-tipping, dog fouling and littering.

The pair have been in post for around six weeks and have so far tackled the weeds from the Pelican garage to Parton, shifting around one and a half tonnes of weed and debris.

They’ve been litter picking in the Mirehouse and Woohouse area and have supported other waste team members in emptying bins across the borough.

Malcolm Litt, who spent 25 years as a mechanic and 14 years as an AA patrolman is enjoying his new role and particularly the chance to work outside during the recent spell of good weather: “I enjoy doing things that make a difference. It’s great to be able to see the results of our work almost immediately.”

Greg Smith spent the past twelve months undergoing an apprenticeship in street cleansing and is using his experience in the field in his new role. Greg said: “I like being outside and this role gives me a chance to work outdoors.”

Mike Starkie, Mayor of Copeland, said: “I’m delighted that we now have Malcolm and Gregg on board to support our efforts in cleaning up the streets of Copeland.

“I am fully committed to this campaign and believe that we all have a part to play in improving our borough.

“This is why we have created these two new posts to show Copeland Borough Council’s commitment to making Copeland a better place to live, work and visit.” 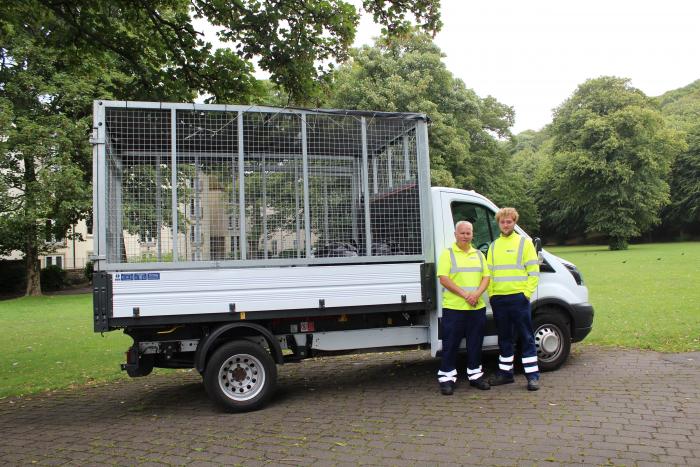