John Jackson and Lena Hogg were voted in unanimously Aldermen of the Borough, an honorary title awarded to councillors for their service.

David Moore, in proposing Mr Jackson, said: “He was a valued member of this council for many years and always proved his worth.

“He always spoke up, worked hard and was proud of his community.

“When John was Mayor, he and his wife Linda must have represented this council at more than 300 events during the year, and I’d like to thank them for all they did for this borough.”

Alderman Jackson joined the council in 2003.  He said: "I am extremely honoured to have been nominated as an Alderman for Copeland. I served as a councillor for Beckermet and Thornhill for 12 years and felt privileged to do so.

“As Mayor of Copeland in 2011-12 I enjoyed every minute and it allowed me to appreciate what a wonderful part of the world we live in. If that was the icing on the cake of my political life, this latest honour must be the cherry."

“She always had the community at heart, irrespective of what political banner people held.

“She demonstrated true leadership, without fear or favour, and is more than worthy of this great honour.”

Alderman Hogg was elected to the Egremont South ward in 2011. She said: "I feel it’s a great honour to have been chosen by my peers to become an Alderman - I thank the council and the mayor. It was a privilege to serve the people of Copeland and I hope they feel I served them well. I certainly did my best.

“Mostly, I would like to thank the people of Egremont for electing me to serve. As I am still on the town council, I will continue to do my best for Egremont.”

Mrs Hogg and Mr Jackson were presented with their pendants by the new council chairman (check that) Coun Peter Connolly at today's meeting at Egremont Market Hall.

* Also, at the meeting councillors elected Peter Connolly as the new chair for 18/19.

Coun Connolly succeeds Alistair Norwood as chair of the council, who he thanked for the “excellent” job he has done over the past year. "I am very pleased to be in this honoured position as my final political swan song." said Coun Connolly.

Coun Connolly was elected to the post at Copeland Council's Annual General Meeting today. His deputy chairman for the forthcoming year is Joan Hully.

Coun Connolly has served as a Copeland councillor for 33 years, being first elected in 1981, and having a brief hiatus from 1991 to 1995.

During this time Coun Connolly has served as Mayor from 2002 – 2003 and chair of the licencing and overview and scrutiny panels, and the now defunct finance and general-purpose panel.

Coun Connolly is looking forward to taking the reins: “I will be supporting the Mayor in his ambition to uplift the town of Whitehaven by encouraging property owners to take pride in their business premises.”

*Also, at the AGM the Mayor presented this year’s summary of achievements, highlights included; 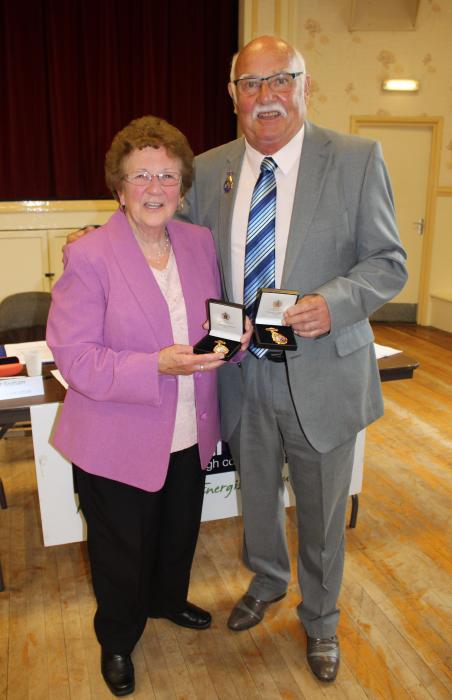