Furniture dumped on a rural road in Copeland

FURNITURE has been dumped on a rural road in Copeland.

A sofa, chair and mattress were fly-tipped on the road between Pica and Distington, and have now been removed by Copeland Council's waste team at a cost to the taxpayer.

The incident comes after the council launched the Copeland Pride of Place campaign two weeks ago with the aim of helping to combat issues that blight the borough, such as fly-tipping, littering and dog fouling.

Mark Holliday, Copeland Council's Portfolio Holder for Waste, said: “It’s a disgrace that our area is being blighted by people who have a complete disregard for others.

“This is a continuing reminder why we must implement our Pride of Place campaign to try and eradicate this selfish, thoughtless behaviour.

“We live in a beautiful part of the world and everyone should respect and take pride in it, and the minority who don’t, leave themselves open to action.”

The Council announced in October an increase in fines for fly-tippers from £200 to £250. It can also prosecute more serious cases of fly-tipping, which is punishable by a fine of up to £50,000 or 12 months’ imprisonment if convicted in a Magistrates’ Court.

“We have had cases where someone has found themselves being investigated for fly-tipping because they brought in a firm they saw advertised on social media, who picked up their items and simply dumped them elsewhere.”

The council are asking anyone with any information relating to this incident, to get in touch.

Copeland Council charges £25.50 for a three-item bulky waste collection. To arrange a collection or report information relating to an incident of fly-tipping, call 01946 598300 or email info@copeland.gov.uk.

For more information on the Copeland Pride of Place campaign go towww.copeland.gov.uk 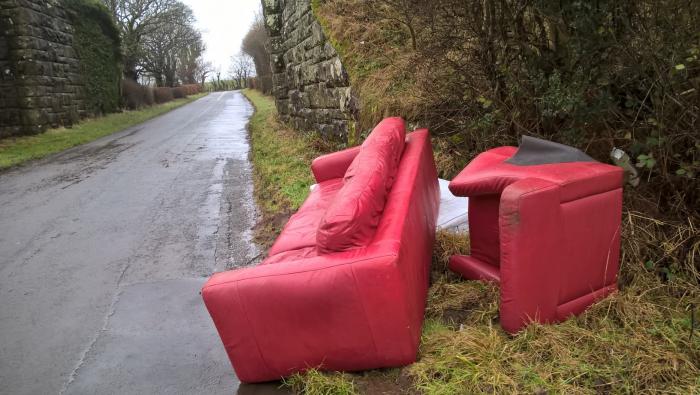