MARATHON man Gary McKee has been awarded the Freedom of the Borough of Copeland.

Mr McKee, who ran 100 marathons in 100 days for Macmillan Cancer Support, received the rare accolade – the highest a local authority can bestow – at a ceremony in his home town of Cleator Moor today (Friday).

Mr McKee said he was “humbled” to have received the accolade, and extended his thanks to all those who have supported him.

In presenting Mr McKee with his gold inscribed Freedom of the Borough badge, Copeland Mayor Mike Starkie said that his record-breaking marathons achievement earlier this year was “remarkable and truly inspiring”. The £100,000 he raised took the total he has raised for Macmillan to over £300,000.

Mr McKee said: “Although I've known about the award for quite a while, it still feels unreal to be recognised by the Council and presented with the Freedom of the Borough award. It means everything to me.

“I’m humbled to be seen through the eyes of others as inspirational and a driver for change.

“But the really remarkable part is the money that people have donated, and the support they have offered me. That’s the inspirational story.”

Mr Starkie added: “I can’t speak highly enough of Gary McKee – his achievements have been absolutely remarkable and truly inspiring.

“The money and awareness he has raised will make an enormous difference to the people of this area, and he has brought positive national and international coverage to Cleator Moor and Copeland.”

Mr McKee began supporting Macmillan when his father, Victor, was diagnosed with cancer in 1997, and started a series of national and international endurance challenges, specifying that all the money raised stays locally.

It has included a cycle ride through Brazil (2004), a climb to the top of Kilimanjaro (2005), a trek of the Abel Tasman in New Zealand (2007) and a run from Land’s End to John o’Groats (2011). Additionally, he has run the Coast 2 Coast and completed the Cumbrian Run nine times and has organised host of fundraising events in local pubs and clubs.

He also holds assemblies in schools, offering an insight into fitness to the next generation, alongside spreading awareness of cancer support and the work of Macmillan. He was named Macmillan’s National Volunteer of the Year in 2012, and carried the Olympic torch through Whitehaven in the same year.

Earlier this month, Mr McKee was named the Fundraiser of the Year at the inaugural North West Charity Awards, and is one of four regional finalists in the Volunteer of the Year category in the Pride of Britain Awards.

Copeland’s councillors voted in May to bestow this honour on Mr McKee. The presentation event was supported by Mr McKee’s employers, Sellafield Ltd.

“The scale of his achievements over 20 years of fundraising is breathtaking.  It’s almost impossible to do justice in words to his determination, dedication and selflessness.

“I hope this honour can go some way to showing Gary just how much we value his enormous contribution to our community.”

Sue McDonald, Fundraising Manager for Macmillan Cancer Support, said: “The challenges Gary has set himself over the last 14 years have been nothing short of amazing. Gary, who is such a humble, unassuming, family guy, has put Copeland firmly on the map.

“He has brought the whole community together and inspired others to be the best they can be. Where Gary leads, others want to follow.

“I can’t think of a worthier recipient of the accolade being bestowed on him today; it is testament to everything Gary has done in, and for, his local area. Everyone from Macmillan Cancer Support is so very proud of Gary and what he has achieved.” 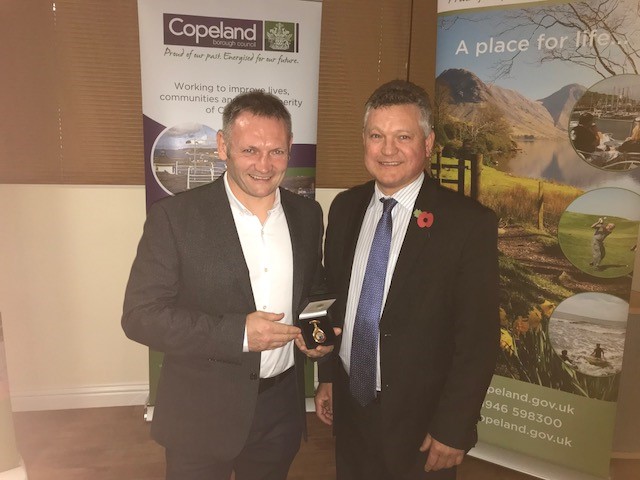