Residents in areas including Mirehouse, Corkickle, Egremont and Beckermet had received letters about their properties from developers NuGen. These areas are under consideration for some of the off site developments such as transport and housing.

The meetings follow a drop-in information session run by NuGen at Mirehouse Labour Club from 1.30pm until 6pm. They are:

Mayor Starkie said: "The council were not aware these letters would be going out and residents contacted me as soon as they got them. Lots of them are extremely alarmed as questions included who lives at each house and what the mortgage arrangements are. Compulsory purchase orders were mentioned and people were given a deadline for replying, which was understandably unnerving.

"I invited NuGen's CEO, Tom Samson to attend and I am pleased to say he has accepted. He will be at both meetings and I will be able to ask him the many questions people have already emailed me. It's a chance for NuGen to allay fears and give people much more information about their plans and what stage they are at. I hope everyone who has had a letter, or who may live nearby and be concerned, can make it to one of the meetings.

"NuGen has acknowledged mistakes were made in how residents were communicated with, and apologised. Now, through these meeting and other NuGen-organised events, we can move to finding out more information and moving forward appropriately."

Residents who would like to ask a question about the issues raised in the NuGen letter should email them to mike.starkie@copeland.gov.uk . 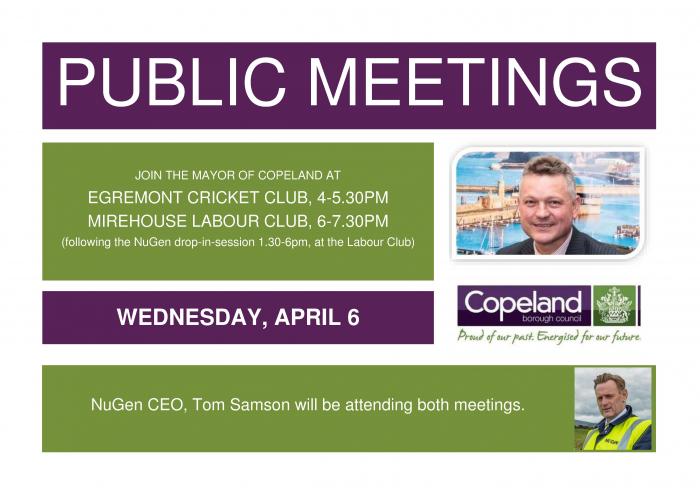